Vast Forest is a location in OMORI. It is the first proper area of the game. 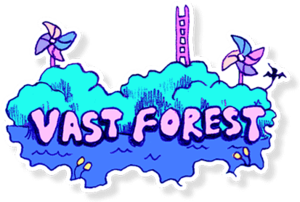 The Vast Forest can be first accessed via the tree stump in the middle of Headspace. It is the central point of Headspace. To the West of the Tree Stump is Pyrefly Forest, to the north is Deep Well, and in the east is Otherworld. To the South of the Stump is the Playground and more branching paths.
The Vast Forest also has a subarea and an entry point to the Orange Oasis. Many of Omori's friends can be found on the playground, including Mari and Basil. To the South of the playground there is a sign and another intersection.

To the west of this sign is an area that further connects to the Train Station and a small cave containing the Wise Rock. Furthermore, several snacks and charms can be found here.
Berly's lost ball can also be found here. Walking further west will bring you to the foggy bridge, which connects the left and right side of the Vast Forest.

To the east of the sign is an aera that further connects to a grotto containing the Shadow Dog. Directly above of the grotto is a ladder to the Pinwheel Forest. Watermelons can be found here that contain snacks and charms.
Going even further will lead to the foggy bridge, which connects the left and right side of the Vast Forest.

Lastly, Basil's garden and house can be found south of the sign.

Having made plans with Basil and Mari to meet them at the playground, Omori and his friends leave Neighbor's Room to visit the playground in the Vast Forest. Upon entering the playground, the group spot Mari and Basil and join them in their picnic.
After chatting a little and looking at Basil's Photo Album, Basil invites Omori and friends to his house before being stopped by Berly


Berly forces Omori and friends to play Hide and Seek with everyone. She makes everyone draw a straw to decide who gets to seek. Omori ends up seeker.
Subsequently, everyone regroups and notices that Basil has still not been found. They hear a rustle nearby and decide to look around. Shortly after, Boss, who was excluded from the hide and seek, makes his presence known with Basil in hand. Lastly, he challenges Omori and friends to a fight.
Having beaten Boss, Omori and friend make their way to Basil's house.


Upon nearing his house, Basil snaps a surprise picture of his friends. Aubrey and Kel then fight over who gets to see it first and end up pushing Basil, making him drop his Photo Album and fall. The pictures all fly out of the Photo Album because of the fall.
After picking the photos up, the group enter Basil's house and insert the photos back into the photo album.


Once the group was almost done, Basil finds a photo he doesn't recognise, fearfully exclaiming "Mari, she's-" before Omori is forcefully sent to White Space.
Thereafter, the Vast Forest becomes the starting point of the nights spent in the Dreamworld. The next major event appear at the start of the third night, where all of Omori's friends disappear, with Mari then guiding the player to the Deep Well.

Since Sunny is getting further and further away from revealing the truth in this route, Mari does not show up to guide Omori in the third night, with Kel appearing instead. This causes the visit to North Lake being cut short tremendiously.
After Omori saves Basil from Black Space, Headspace is reset. This causes minor changes to the Vast Forest, with the biggest change being the presence of the hairband charms in Basil's house.

The main entrance of Headspace, connecting it to the Neighbour's Room and White Space, this area serves as an intersection to Pyrefly Forest, Otherworld, the Playground and the Deep Well.


In the first night, when Omori and friends first go through the stump, a WTF Value between 1 and 13 will be set that changes some of the events that can happen in the game, the higher more events will change, usually leading to more jumpscares.
After dealing with Something in the Dark, the Blackletter "A" can be found blocking the entrance to the playground.
In the second night, a group of Lost Sprout Moles will attack the player and reward the party with four show tickets.

The Forest Playground is the area where Omori and all his friends play hide and seek, it contains one of Mari's many picnic blankets, one of the flying mirrors scattered around Headspace, a sign that changes its content almost daily, a mailbox shop and many friends, as well as the location of the first enemy the party encounters, Boss.

While in here, Shawn and Ren are able to teach Omori the skill "observe" after the hide and seek, Daisy will offer the quest Daisy's Dilemma and reward the player with a Daisy (charm) after completing it. Berly and Van will also offer the Berly's Lost Ball quest, completing this quest will reward the player with the Butt certificate and teach Aubrey the skill "headbutt", after doing the quest and completing the tutorial, talking to Berly again while she is here will increase Aubrey's juice by 20.
Lastly, the shop located here sells Candy, Apple juice, Jacks and Presents.

The Pinwheel Forest is a subarea in Vast Forest. It can be accessed with a ladder east of the sign right under the Playground. The Pinwheel Forest is a high up area, many clouds are visible and it's is visibly foggy. There are many big pinwheels sprinkeled with the trees. In the north, Mari has set up a picnic and Kite Kid can be fought, after being fought it's possible to play with the kite, Hero will have a plain normal kite, Aubrey a bunny like kite, Kel an odd kite and Omori a kite resembling the Big Yellow Cat, at the side there is also another of the many flying mirrors around Headspace. There's also a Hat Ghost and the Blackletter "C".
Lastly, there is a watermelon stuck in one of the big pinwheel that falls if Kel throws a ball at it, it contains a spaghetti. If Kite Kid is defeated after doing this, his dialogue will change when being defeated.

The bridge is a foggy area that connects the two sides of the Vast Forest and the pier, when arriving here during the prologue, the party will tell that Basil certainly can't be found there, there is also the Blackletter "B" near the middle.
There is not much in the pier, but if the player first arrive in this area before going to the Otherworld, it will show Stranger in an unreachable area, near the Blackletter "R", this area later can be accessed by an stair found in the Last Resort's construction site. If the party goes there during the epilogue, Cindies and Sallies will be in the area.

Path to Basil & The Old Shoe

"Path to Basil" is the name of the map located below the playground, it contains a Pluto's Spaceline station, and several flower patches made by Basil, with the tulip being dedicated to Sunny[1], Cactus for Kel[2], Gladiolus for Aubrey[3], roses for Hero[4] and lily of the valley for Mari[5].
He describes his friends by relating them to flowers, with the sunflower[6] being how he wants to be.


The Old Shoe is where Head Space Basil lives. After his disappearance, the shoe house and it's surroundings will start to decay, getting worse as the Hangman game progresses.
After completing the Hangman game, the decay in Basil's house forms a hole that leads to Black Space.
If Head Space gets reset in the Hikikomori Route, the shoe house and it's surroundings will go back to its pristine conditions, with some powerful charms to be found there.

The Train Station is an area located within the Vast Forest with various NPCs, specifically:

Most of the other minor characters will not be here after the prologue, as they will instead be found in Orange Oasis. There are also three watermelons containing popcorn, sparkler and plum juice.


After being gifted the train pass from Captain Spaceboy, the party will be able to catch the train.
The first time the party goes to the train, they will be temporally stuck in an infinite loop, after running in one direction for a while, a Dorothi will block the way, and then quickly charge at the party.
After the fight, the train will be filled with toasts, and after getting out, the party will find themselves in the Orange Oasis.

There are several alcoves hidden in the vast forest, which can contain items, characters or events.
The already mentioned shadow dog grotto can be found on the east area, interacting with the dog have a chance of giving the player several items, including cans, rubber bands, life jams, cherry soda, hot dog and sparklers, it will also unlock the Good Dog achievement.


The Wise Rock can be found in the west area, near the screen transition, interacting with the it allows the player to spend clams in exchange of some not very useful tips, these can be seen better at its page.
The shroom alcove can be found close to where Berly's ball found, after learning how to cut one open in Sweetheart's Castle, it's possible to reach a higher area and interact with the pink flower in the middle, doing so will have an 80% chance of receiving nothing and 20% chance of receiving either a mango smoothie, S.berry smoothie, berry smoothie or a melon smoothie, with higher chance for the latter. This can be done multiple times without penalty.


A hidden tree with a tire, at the first arrival, Something will be at the side of the tree and quickly disappear.
After Humphrey is defeated, interacting with the tree will show a short image in the background and after a screen flash, the tire and Something will be gone. Reentering this room afterwards causes Nanci to spawn.

After Basil disappearance, the flowers will start to decay. Each day, after defeating one of the major Somethings, the rate which flowers decay increases until completing the Hangman puzzle, when all the flowers die.


The amount and which flower decays is decided by a variable called "Watering Decay", with a sunflower decaying after defeating every major Something, and other flowers based on other more complex variables, with increased chances based on how far the game's progressed and how many times the player called a teleport event by changing maps.
Lastly, the flowers will only decay when the party arrives on this map.


It's possible to water the decayed flowers. This will refresh them and causes Omori and his friends to gain extra maximum hearts. This has a 25% chance of happening per watered flower.
Different flowers give hearts to its associated party member, except Omori, who gains hearts from the tulip, sunflower and the lily of the valley.


There is an ending that is associated with these flowers. The player must water the flower after defeating Mr. Jawsum but before first entering Humphrey.