From OMORI Wiki
Jump to navigation Jump to search
This article is currently being worked upon.

Sweetheart's Castle is a location in OMORI. It is not optional. 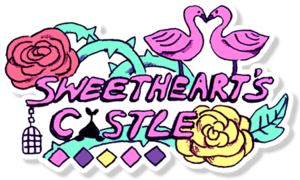 Sweetheart's castle is split into three segments; the dungeon, the proper castle and the garden.
It starts out underground but ends up being tall above the ground.


Four Blackletter can be found in this area, 2 of them are correct.

There is a watermelon and several pieces of furniture found on the balcony; a chair and a table. The chair is positioned in a way, so that Sweetheart can sit on it and look into the horizon. On the table there is a porcelain set. Smashing the watermelon will grant you the Tea Pot.

The Royal Theatre is a cinema of some sorts that lets you watch one of 11 movies. Popcorn Girl can be found selling popcorn for 60 clams a piece. Watching all the movies will grant the player the "Everyone's a critic." achivement.

The servant's quarters can be found north of the Royal Kitchen. Several things can be found in here: a french speaking sprout mole that says: "Sors de ma chambre ou j'appellerai les flics", a cake that smells like garbage, a pearl, the blackletter 'G', Mari and a Mirror.


There are two moles that will ask Omori which one is the more handsome one, the chosen one will then run out of the room.

Cake that smells like the ocean, a pearl, the choir, mole that wants to dance with you