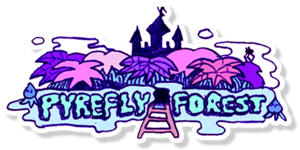 The Pyrefly Forest is a location in OMORI. It is the third proper area of the game.

The Pyrefly Forest can be accessed on Three Days Left and onwards, after Omori overcomes his fear of spiders. It is located left of the stump.
At the end lies the Sprout Mole Village and subsequently, Sweetheart's Castle. Additionally, it contains a secret passage leading to the optional Lost Forest.
Along the path, the player can find a Matchbox on an elevation past a spider web. Another room contains a picnic, a mirror and Cat Ears hidden behind it.
A Spaceline Station, a mailbox and another picnic can be found past the minecart track required to progress. King Crawler is the boss of this area.

Continuing the search for Basil, Omori and his friends enter the Pyrefly Forest, albeit much to Hero's displeasure. Upon further exploration the party stumbles upon a slimy block obstructing the path, which Aubrey fails to smash through. Instead they must gather Track pieces to repair the tracks of a minecart, which is able to power through the obstacle. To get the track pieces on the other hand, the Matchbox must be acquired, as sets of spiders blocking the path get distracted by candlelight. Candles must be lit to cut down the spider webs. The party reunites with Mari past the obstacle, when the minecart reaches the end of its tracks. Hero hugs her on sight and exclaims how afraid he was, to which Mari responds that it's a bit embarrassing. Kel reminisces that if Basil were here, he could calm Hero down, which Aubrey denies. Mari mentions that Hero should eventually learn to deal with his fears, as Omori does, but he is wishful that it will go away on its own. Before the friends can enter Sprout Mole Village, they will have to deal with King Crawler, a Sprout Mole-eating and centipede-like creature that lunges at them.

The Forest itself remains the same after the reset of Headspace. Like on other picnics, Basil joins Mari on the blanket. Unlike most others however, he has special dialogue on this picnic. Basil tries to calm Hero down by reassuring him that spiders aren't as scary as they look and that they are a big help for maintaining his garden. It does not seem to soothe his fear however.

Near the entrance to the forest is a lake, in which the Weeping Willow resides. She can be summoned by throwing 1 clam into the lake. She asks the friends to tell her a joke, which must be written down in the Joke Book. If someone other than Hero attempts to read out a joke, they will be too embarrassed to do so. The right joke to read out is found on the Construction Site within the Deep Well, and the player will be granted the LOL Sword as well as the "xD" Achievement for doing so. Any others will cause the Weeping Willow to cry and to disappear until another clam is thrown into the lake.

A path hidden in the trees will lead the party into an area full of what appears to be Mewo. When coming closer however, it'll reveal its long legs and chase them. Should it catch the party, they will be sent back to the start, with all but Omori stuck in spider webs. The friends have to be freed, otherwise the player will not be able to leave. Past the maze is another short glimpse of Something ontop of a treestump. Stranger can be seen disappearing within the woods. Following him leads to the Lost Forest.

Another Club Sandwich can be found here near the Rare Bear by entering the waterfall behind it. Aside from the hosts Reuben and Hoagie, Sir Maximus IV can be met at the counter mourning the death of its ancestors. The Rarest Bear is found relaxing on the couch, and a constantly spinning Sprout Mole is on stage crying for help.

Hero starts battles against the Bug Bunny and the Potted Plant afraid.