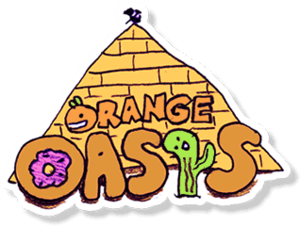 Orange Oasis is a location in OMORI. It's an optional area that can be accessed by using the train pass on the Train Station.
This area connects with the Vast Forest by the train station, the Rain Town accessed by interacting with the orange lake nearby Mari's Picnic and to Dino's Dig, located in the middle of the Oasis.

The Orange Oasis is a desert made out of food, the sand on the ground is brown sugar and there are trees that resemble bananas, the enemies fought here and the characters found here are also similarly themed. A point of interest is the Dino's Dig.
Being an optional area, nothing forces the party to come here, an optional dungeon with a boss can also be found, as well as various items of all kinds.

Near the center of the Orange Oasis, Dino's Dig can be found, close to its entrance a vending stand can be found selling Milk, Peach Soda and Orange Juice, depending on which tile the character interacts with, on one of the tables the Tofu Connoisseur can be found exchanging Tofu for various types of Snacks, the area's Mailbox sells Waffle, Pancake, Berry Smoothie, Air Horn and Life Jam.

North east of Dino's dig, a Treasure Map can be found that details the location of the Blackletter 'X'. Near the map are a telescope and a floating mirror.
At the top of Dino's dig building, Scott, a dinosaur asks you to scratch his back. This initiates the "Itchy" quest.


Near the middle of the area, Mari has set up a picnic near a lake, interacting with the sparkling tile found at the top of the lake leads to Rain Town, on the elevation nearby Mr. Outback and a watermelon containing a Wishbone can be found, to reach the top of the elevation, Omori must first learn how to cut open the big mushroom's bulb in the garden at Sweetheart's Castle. If one arrives here after overcoming the fear of drowning, then Mr.Outback will be turned to sand.

In the upper right corner, a crossant can be found on its back, if flipped over, he will thank Omori and walk away, several houses are located here as well.
Right below that a sandwich club door can be found, Near that is the path to the toast grave.


In the lower right corner is a small area with a joke, Large Face and a hat ghost.

Lastly, Peach Soda, Grape Soda, 2 Mango Smoothie, S.berry Smoothie, Apple Juice, 8 Banana Smoothie, Life Jam, Orange Juice, Breadfruit Juice can be found inside the area's watermelons, however, some of these watermelons are hidden from sight, being found behind structures and trees.

Palmie's home, where Jelly can be found with the quest "Present for Palmie", Palmie herself and Peanut roaming around.

A house with three Donut Grandmas, interacting with the bookshelf on the house brings up a photo similar to Pessi's Thing.

A small cave with Rell, Mina and their 6 children Victor (which is on Rell's arms), Nova, Luke, Adonus, Jojo, and Nathan.

The arrow cave main entrance can be found on the small whirlwind nearby the houses, it consists of a small maze with various enemies that only spawn if the party takes the incorrect way, at the very end, there is a small board with "you did it" written on it, as well as the stairs leading back to the central area.

For information regarding the train, go to Vast Forest.

The Orange Oasis' small train station, going into the train leads back to Vast Forest, various NPCs can be found here, most of them could also be found during the first day on the line to take the Vast Forest's train, some Gator guys can also be found here nearby the pamphlets about Last Resort, but will disappear after the second night.

A small cliff north of the central area with a small orange-like house in the middle, Orange Joe can be found here throwing oranges on the cliff, the quest "The Conviction of Orange Joe" can be acquired with him, after finishing the quest, Oragne Joe will also be found here, "commemorating" with Orange Joe.
Interacting with the pool nearby rewards with an Orange Juice once. Lastly, various Oranges can be found in the ground with the following message:

"To my dear brother Oragne Joe. I hope this message finds its way to you. Please come home.".

Orange joe's home, a normal circular house, like the outside various oranges can be found scattered on the ground, as well as a watermelon containing a Blood Orange, however, after completing the quest mentioned above, the house will change its layout, causing the watermelon to disappear.

To the east of the central area, a short path can be found with various toasts sticking out of the ground, the Man on Fire can be found running wildly back and forth the path, stopping him either by blocking his way or by trying to talk to him when he's in front of the party will cause him to talk, agreeing with him rewards Hero with the skill "spicy food". Following the path leads to the Toast Grave itself.
The toast grave is a small "graveyard" with two lines of toasts, interacting with the last four toast in from right to left, as seen in the Ancient Code, opens the way to the doom entrance, the now unattached bread can be interacted with, rewarding it with a Bread, after completing the small dungeon, the party will spawn back in the graves accompanied by a watermelon containing the Breadphones.

Inside the toast grave

The first map found once entering the grave for the first time is the doom entrance, a small pool, blocking the way of the party if they arrive there before Sunny overcomes his fear of drowning, stands between the entrance and a corridor leading to a giant bread, interacting with it causes it to crash in the ground, making the friends fall for the next area.

The party will arrive on the second area, the summoning circle, by falling on a pile of flour, which will cover everyone in flour, changing the sprites. Moving further the party will see a big room guarded by an Actual Mole, which will lead the party back to the graveyard, various offerings that can be sacrificed in the middle of the circle, causing a variety of effects:

When the party takes one of the offerings, a number will be visible on the table, forming the code "7201969", the code can be used on the safe nearby, revealing a Recipe 4 Disaster, once in possession of this item, the party will be able to pick up the Mole and sacrificing it on the circle, allowing the party to also enter the circle and progress further into the area, the circle can only be used this way once, and if the party ever comes here again, the only way out will be the ghost of the Actual Mole.
The friends will be sent to a corridor leading down, following the path for a bit will trigger a giant boulder to follow the party, running away will cause the party to fall into a pit, which will cause a fake "you died" screen to show up and will eventually lead the group to the next area, letting the boulder reach them also causes the same outcome.

After the fake you died screen, the party will be toasted with Omori waking up in the middle of a pantry, 3 watermelons containing Life Jam can be found around the room and can be used to revive the 3 friends.

Moving out of the pantry leads to the baking room, where a picnic, which can only be accessed the first time the party arrives here, as the room becomes inaccessible afterward, two other pantries with watermelons containing Bread, Waffle and Donut and a corridor leading to the bakery where Biscuit & Doughie can be found, approaching them triggers a cutscene which ends in a boss battle with the Unbread Twins, winning this fight's optional and after it the brothers will leave through the portal, taking the portal will lead back to the toast graveyard.

"'Come down to the Last Resort, grand opening in scenic Deep Well! Enjoy this luxury getaway, located just a few miles away from the city.'"
"'Bask in the finest amenities the world has to offer at our private retreat and leave truly transformed!'"