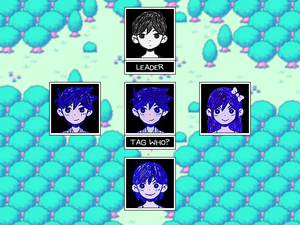 The tagging menu as seen in-game when pressing the assigned key, the middle square shows the current leader.

Tagging is a game mechanic that allows the player to change the leading member of the party quickly either through an assigned button or the menu. Different leaders can perform different actions, as seen deeper in this article. Every time the party tags, a photograph sound will play and a polaroid showing interaction with the current leader and the new leader will block the screen to prevent the player from seeing the change.
The tagging function becomes available during one of the first cutscenes of the Junkyard, and the whole area is considered a tutorial area for tagging.

While leading, Omori can cut branches, traffic cones and spider webs, Omori is also the only member able to see and interact with the keyboard keys scattered around the world, as well as talking to some creatures that only Omori can understand, such as the creatures found in the Deeper Well. In Faraway Town, Sunny is also able to cut spider webs, during the start of the second night, and cones during the third day of the true route while in the Recycultist's HQ.

While traveling alone in some areas of Black Space, the tagging option is replaced with a "stab" option, allowing Omori to return to the entrance.
Sunny also has this interaction after confronting the Stranger on the hikikomori route, this stab option can only be accessed by the menu and, on such occasions, pressing the key assigned to the tag function does not have any effect.

Different from other party members, Omori does not have his tag explained during the Junkyard as stated above. 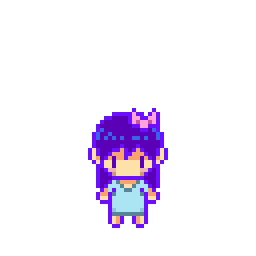 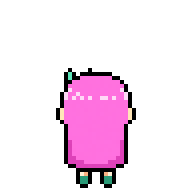 While leading, Aubrey can smash debris, pots and barrels found all over Headspace, destroying it allows access to some areas, with the possibility to give the party clams and items in the case of pots[1] and barrels[2] found in Sweetheart's Castle and Deep Well respectively. Tagging Aubrey is also necessary to do Aubrey's power-up event, where she gains extra 20 juice. In Faraway, Aubrey is able to smash debris found in the Recycultist's HQ.

Aubrey is the first character covered in the tutorial, and will also tell Omori about the tag button:

Kel's tag animation on the Dreamworld.

While leading, Kel can throw various balls while on "throwing stands" to solve various puzzles, later on, he also learns to aim by using a QTE to control directions. Kel is unique as he uses a special event that controls the ball thrown, with 11 different balls plus 3 chemical recipients used during the throwing mini-game inside Humphrey. In Faraway Town, Kel is also able to make a throw in order to make a stair drop down inside the Recycultist's HQ, however, here he will always throw his basketball.

The player learns about Kel's tag after having the way blocked by a giant "keymagnet", in order to advance Kel needs to destroy it by making a throw:

Kel also has a second tutorial for his tag in Sweetheart's Castle garden, after being hurt by one of the statues:

While leading, Hero can use his charm to persuade NPCs, receiving discounts on mailboxes and the toll gates Gator Guys, opening Club sandwich after defeating Mr. Jawsum (only needed on the first one) or to receive items from various NPCs who are thankful for his actions prior to the events of the game, a complete list of the latter can be found below. Like Aubrey, Hero needs to be the leader when doing his power-up event and gain his extra 20 attack, in Faraway Town, Hero's able to use his charm to convince the Recycultists inside the HQ to join Sunny's party, necessary in order to reach their leader, the Recyclepath.

Hero is the second party member that the player learns its tag's properties, allowing the party to change the directions of a conveyor belt by talking to Mr. Conveyor-bot:

If Hero is already tagged:

If Hero is not tagged:

After the charm animation:

If Hero talks to certain NPCs all over Headspace he can sometimes get a reward.