The Junkyard is a location in OMORI. It is a subarea within Otherworld. Skipping this area is not possible. 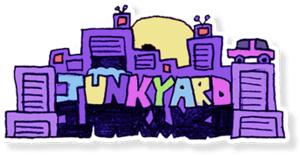 The Junkyard is a linear area themed around old technology and, like Otherworld, space. It can be accessed after Captain Spaceboy's crew gives the group the Junkyard Key, it's also where the player is taught about the tagging mechanics.
It is built like a labyrinth, having one entrance and one exit with containers acting as the walls, once the party finishes their adventure there, a shortcut will open leading back to the entrance of the Junkyard.
The group can learn a joke, find a hat ghost and obtain a few items.

After meeting Captain Spaceboy the group receives a key to the Junkyard. In the Junkyard they find Rosa with the Special Mixtape, after she refuses to give it to them, she runs away.
Later, after they caught up with her, they find her on the other side of a line, frozen and unresponsive. They go over the line and get surprised by Download Window. After they defeat it, they retrieved the mixtape from Rosa and returned to Captain Spaceboy.

As soon as the party enters the area there will be a blocked road, later opened after defeating the area's boss, and a single way forwards that leads deeper into the area, in this map it's possible to find rubber band, granola bar and the sellable charm "gold" watch.

Going further informs the player about the special battle event when encountering enemies within the Junkyard, named simply as "Junkyard", Kel will always look into the trash at the start of the battle, with a chance to find cans, tofus, rubber bands, chocolates and cherry sodas, with 37,5% chance of finding nothing at all. This area also informs the player about Aubrey's tag, allowing the party to break the giant block blocking the path forward, there is also some watermelons and interactable sparkles containing glass bottle, air horn and the thingamabob.

After this area is a place with various treadmills and a locked gate, which directions can be changed by interacting with the Conveyor-bots, prompting the player to change the leader to Hero to convince the Conveyor-bot to work, only the first interaction needs Hero to be the party leader, taking the treadmills allows the party to reach another Junkyard key and progress further, it's also possible to find Life Jam Guy hidden in one of the containers, interacting with him explains the uses of life jam, gives some of it to the player as well as allowing the party to buy more for 250 clams. Lastly, there are watermelons and sparklers containing cans, glass bottles, chocolates, the comet hammer and the flower puzzle, as well as the location of one of the Glasses Ghost and vending machines allowing the party to buy tasty sodas.

Continuing forward leads the party into a small tunnel, if the WTF Value is equal or higher than 2, a photo of "someone familiar" will be there, if interacted as Omori, Something will appear briefly and the photo will be removed from existence, a life jam can also be found here.

Once exiting the tunnel, there will be a small area containing some vending machines and a watermelon with lemonade, followed by a last tunnel before reaching the next part of the location.

Top of the Junkyard

With a Picnic right at the start of this map, this is a fairly straight path with some items scattered through the trash, where the party can find a can, computer part, dead batteries, glass bottles and the Bubble wrap, as well as a watermelon containing star fruit soda, there are two exits in this area, way forward, which blocked by a "Keymagnet", which the party destroys during Kel's tag tutorial, and a path by a container, which eventually leads to the Scarethrow's cave, the way will be blocked by Gator Guys before doing Kel's tutorial.

Going further leads the party to a large area with an entrance to the tunnel, which leads to different parts of the map:

A small cave containing Scarethrow itself and a stand that allows Kel to throw balls at him, every ball thrown at him play one of several possible sounds (none of them related to fear), it will also talk[2] a bit on the process, exhausting the dialogue will reward the player with the achievement "They call me Scarethrow".

Further, the party is blocked by a giant cheese wheel, which Hero summons Ems to eat to open the way, going further beyond, the party finds Rosa with Cap. Spaceboy's mixtape, who will run away with the party chasing her till the boss room.

A small room with a giant "404" written in the middle, the first time the party arrives, crossing the yellow line will make every moving object stop and trigger the Download Window boss battle.

If the player ever returns to this area during the epilogue and Omori is equipped with the universal remote, it's possible to access the Pain Area by interacting with the glitchy TV.