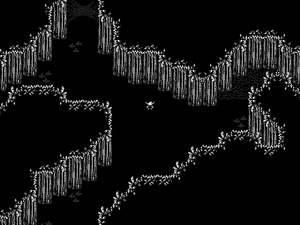 The Playground can be entered through the only door in Lost Forest. Both the swing set and the slide can be interacted with to either sit on or slide down, respectively. Piñata Guy can be found swinging from the tetherball pole in the center. There are multiple giant heads that resemble Omori's.

Interacting with the mouth of the Omori head on the far left will take you to Player Room with Hellmari, which is a dark, black and white version of Sunny's bedroom. Sunny can be found sleeping in his bed, with Hellmari hovering over his head. The player can exit this area by simply walking out of the room.

This room can be found in the Omori head in the very back of the Playground. Inside this room is an endless hallway with Aubrey, Kel, and Hero all lined up and facing the player. If the player tries to approach any of them, they will all walk backwards, keeping the same distance between themselves and the player. Walking down will bring the player back to the Playground.

There is a large carcass near the center of Lost Forest. Walking into the opening in the ribcage brings you to this room. It is a looping, black room full of small, humanlike figures. There doesn't appear to be anything to do here.


If one walks over a specific tile somewhere below the rib cage before having saved Basil, a flash can be seen accompanied with a camera sound. This adds another polaroid in "Player room with hell mari".

The entrance to this room can be found through a clearing between trees, in the upper right portion of Lost Forest. Walking to the far right of the room shows closed, white doors and a figure behind it that vaguely resembles Mari.[1]
Interacting with the door will produce a knocking sound effect. Walking a certain distance away from the door will cause the sound of a door creaking open to play, and Omori to become extremely slow. Returning to the door will show that it is now open, although nothing else can be interacted with. Exiting the room through either openings will bring the player back to the Lost Forest. Attempting to re-enter the room will bring up a text box that says "You are afraid." and you will be unable to enter the room again.

This room can be found by walking through another clearing between trees in the top left of Lost Forest. In the back of the clearing is a tree with a noose tied to it, and Sunny's father repeatedly trying to chop it down. If the player chooses to walk past this room to the left before entering it, Basil and Omori can be see walking out of the room. They will both disappear if the player gets too close to them.

Walking through the waterfall near the Forest Clearing room will bring you here. In this room is a minecart that constantly rides a loop of track, running over any "Lil Basil"s in its path. Between the tracks are a number of Faceless and other figures. Interacting with the pond at the bottom of the room will prompt one of fifteen quotes. A different quote can be triggered by leaving and re-entering the room.

"You see a boy dropping something shiny into a chest."

"You see a boy crying in the corner of his room."

"You see a boy scratching his knuckles."

"You see a boy looking out his window."

"You see two boys and their dog playing outside."

"You see a boy locking a door."

"You see a boy staring at a wall."

"You see a boy digging a pencil into his desk."

"You see a boy burying something in the grass."

"You see a boy sitting in a dark room. The boy lies and lies, over and over again."

"You see a boy sitting at the piano. The boy plays a few notes, and mumbles something to himself."

"You see a boy flipping over his bedsheets."

"You see a boy staring at his fingers. He whimpers in pain."

"You see a man shutting his car door and driving away."

"You see a man desperately hacking down a tree in the backyard."

"You look into the box, but there is nothing inside."

"You scream into the box, but no one hears you."

"Do you still recognize your home?"

Polaroids will be taken from Omori if he steps over specific tiles in certain areas before saving Basil. After they get taken, a polaroid will appear in player room with hell mari.[3]