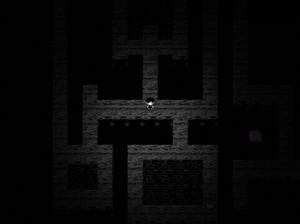 The "Water Walkway" or "The Docks"

The Water Walkway also known as "The Docks" is an area found in Black Space. It can be accessed through one of the doors in the Black Space 2 hub area.

The Corrupted Junkyard is a distorted and corrupted version of the Junkyard found in the top right corner. More info on its own page.

Lost at Sea is a collection of rooms. More info on its own page.

The Red Maze is a maze populated by toast, that once touched, will turn into Hellmari. More info on its own page.

Mari is home is a special area that is similar to Sunny's house that can only be accessed while on the True or Mixed Route. More info in its own page.

A pot can be found immediately after heading south at the starting point. Interacting with this pot will bring you to the kitchen. In this kitchen is Hero and he will ask for something for him to cook.


When brought ☐☐☐, he will cook it, turning it into ☐☐ ☐☐. After this has been done for the third time, he will give you a 'Key' ingredient instead. Obtaining this item will change his sprite in the Weathervane Area.