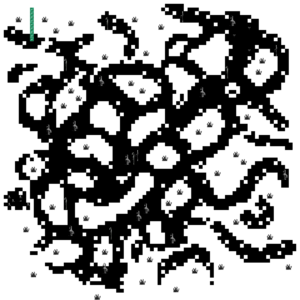 The Weathervane Area also known as "Lost Forest 2 (Water)" is an area found in Black Space. It can be accessed through one of the doors in the Black Space 2 hub area. There is a weathervane found near the center of the room which can be interacted with to change its direction to either north, east, or west, and allow access to different parts of the map.

The Shallow Sea can be accessed by walking into one of the scribbled figures at the top of the map. The direction the weathervane is pointing to doesn't matter.
Walking left from here will simply bring you back to the Weathervane Area. Walking to the bottom of the map yields the same result.
Continuously walking right will eventually take you to another room which contains a purple ladder, but is otherwise identical. Climbing to the top of the ladder will also return you back to the Weathervane Area.

The door to the Small repeating room can be accessed while the weathervane is pointing east. Walking north through the rooms will eventually cause a statue of a woman to spawn in the center of the room that usually turns to face Omori. If Omori steps behind her, she will distort and face forward.
If the player continues walking through the rooms the floor will disappear, and then the room will become darker.

At the end of the Small Repeating Room sequence is a dark room with a large, blob like creature in the back of it. Interacting with the blob will bring up the text "Brother... I'm so glad you're here..." Exiting the room will return Omori back to the Weathervane Area.