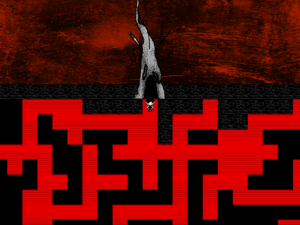 The Red Maze, also known as "Haunted Trees Hanging Maze", is an area found in Black Space. It can only be accessed through a secret passageway in Water Walkway.

The Red Maze is a strange, eerie maze that contains pieces of floating toast, mannequins that resemble Mari, and, in its deepest depths, Hellmari. It can only be accessed by following an invisible path on the Water Walkway, near the Corrupted Junkyard entrance.

The floating toast slices in the room will slowly float towards Omori. If he comes in contact with them, the Red Maze will darken, and they will be replaced with Mari mannequins. The mannequins will move towards Omori, distorting and screeching at him if they come in contact with him. Their touch will actually damage Omori, lowering his health, although they cannot kill him and will simply leave his health at one. Leaving the area and returning will reset the event, restoring the toast slices.

After touching the toast, a textbox will appear on occasion asking Omori to "look at what [he's] done."

Entering the ladder on the left will lead to a dark room. The background of this room continually scrolls, and, as the name implies, features Omori's faceset spritesheet. The room also has three red orbs in the background, guarded by red-eyed faces. Leaving this room by going to the left or the right will bring you back to Red Maze, or alternatively will return you to the Last Resort if accessed through the doll there. 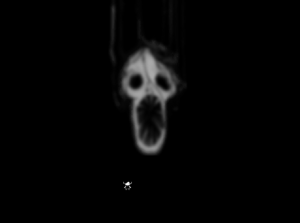 Small room with a ladder

Entering the Ladder on the right will lead to a small room with another ladder in the middle.


While going down the ladder seems to only make the room repeat, Omori will meet Daddy Longlegs after descending 19 times. He will warn him to turn back "while you still can."

Should Omori ignore his warning and continue going down, after climbing down another 19 ladders, Omori will stumble on a strange object that vaguely resembles a toybox. Nothing will happen if he interacts with it.

Going down three more times from here will result in him being taken to the Room with Hellmari.


Climbing back up at any point will return you to the Red Maze, regardless of how far down Omori was.

A seemingly empty, black void. About nine seconds after entering, Hellmari will drop down from above and begin stalking Omori. There is nothing else of note in this room, and it can be left any time by going to the left edge, or by walking to the bottom of the room.

Daddy Longlegs: "Ah... you've come a long way down. But you should turn back while you still can."

The Faces of Omori area can be entered after defeating Humphrey. To access it, simply throw the faceless doll on the second floor of the Last Resort in the trash three times, return to where it originally was and look into its empty eyes.