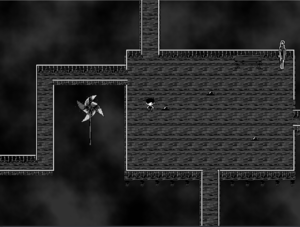 The Cloud Walkway is an area found in Black Space. It can be accessed through one of the doors in the Black Space 2 hub area.

The Cloud Walkway is a walkway high in the sky. Several things can be found in this map.


Omoli can be found begging in the south west corner. After acquiring "Twenty Dollars" from Money Space, Omori can give them Omoli. Doing so will cause him to suddenly disappear.


There is a man named "Big Pocket" in the top left corner. Interacting with him will give Omori an option to dance with him. Once the dance is over, text will appear, saying "You didn't know how to do the dance."
If Omori starts the dance right beside the dance guy, then Big Pocket will start hitting Omori, lowering his HP.


There is a box in the bottom left corner. If interacted, this text will appear "You hear Mom crying softly. There, there... Sunny... We'll protect you... Everything will be okay..."
Roughly east of the starting point is a crying Pluto. If interacted, this line will appear: "Pluto doesn't look like himself. You decided it's better to leave him alone.".

Interacting with the waterfall in the north west from behind it will warp the player to another area.
In this area are many figures that whisper amongst eachother. These figures tell Omori that they miss him and want him to return. If the room is re-entered, these figures will tell Omori that they don't know him.
Interacting with the waterfall there will warp the player back.

Entering the door in the east of the hub will bring the player to a dark room with another door. Repeatingly entering the door will eventually bring you to Herosaurus, a weird fusion between Hero and a Dinosaur.
Interacting with the Dinosaur will show this dialogue: "Do you still accept me?". Leaving this room will bring you back to the Cloud Walkway.

Walking south and then taking the first path east will bring you to Loomy guarding a toilet. After interacting with it, it will start to follow you, telling Omori that "It can travel between toilets." and telling him to "Tag him in".
Loomy can either be dodged or killed by being interacted with, which will execute Omori's tag animation. Once done so, a toilet will be accessible. If the player interacts with the toilet, they will be brought into Money Space.

Money Space is a room with a pool full of money with Kel swimming in it. Interacting with the pool will give Omori "Twenty Dollars". This can be repeated an infinite amount of times.

After acquiring "Twenty Dollars" atleast once, a door will spawn above the starting point. This door will attempt to run away but can be entered by cornering it in.


The "Beach" is a crudely drawn island and sun. There's a crab and a palm tree on the island. Interacting with the crab will cause it to tell Omori "I can't wait for my tan!".
After a few seconds, the island will catch fire. While engulfed in the flame Omori can either stab himself or interact with the crab again. Interacting with the crab again will tell Omori that "Crab is dying.".
Staying in the fire will slowly drain Omori's HP until it hits 0, killing him. The Island can always be exited by swimming back to shore.

"The Faceless are speaking in hushed whispers amongst themselves."


Money Space:
"Welcome to Money Space. Only Kel is allowed in here."