TV Girl is a female NPC located in the Otherworld Campsite in OMORI. 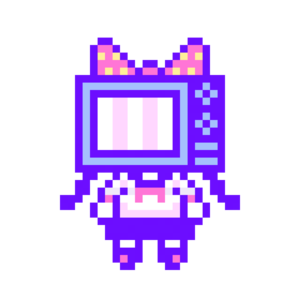 TV Girl takes on the appearance of a schoolgirl. Her most noticeable feature is that her head is an analog television. She wears a typical Japanese female school uniform similar to Mari's, with the only exception being that her shirt is white rather than purple. She also wears her purple hair in two braids, and a pink bow sits on top of her head.

TV Girl is a friendly, fast-talking girl who seems to love coffee. She does not often get visitors, instead preferring to spend time staring at the many screens within her house. However, she does not hesitate when asking Omori and his friends for a favor.

Upon entering TV Girl's house from a hidden passageway in the Otherworld Outskirts, interacting with her will prompt the Strange Request quest. Following this quest, you are given access to her coffee machine. Speaking to her further will prompt a single line of dialogue.

TV Girl: "Dang... All they've been showing lately is re-runs... When is something new going to show up?"