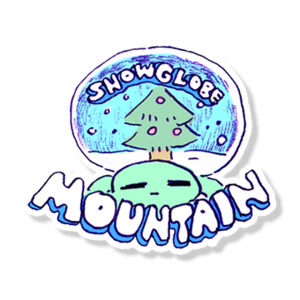 Snowglobe Mountain is a location in OMORI. It is an optional area exclusive to the Hikikomori route that can be accessed through the igloo in Frozen Lake after obtaining batteries from Pinkbeard.

Snowglobe Mountain is made up of three distinct areas: a sprawling forest filled with snow-covered trees, a more peaceful mountainous area, and an icy mountain peak. The area is themed around winter, and it is perpetually snowing there. Much like The Abyss, the other Hikikomori-exclusive region, Snowglobe Mountain is sparsely populated, containing several new enemies but only two NPCs and one boss.

After inserting the batteries into the plastic fish inside the igloo, a trap door will open. Going down will lead to an area with a Mr. Penguin and a summoning circle like the one in Orange Oasis, and standing in the middle of it will transport the party to Snowglobe Mountain's entrance. On the bottom of the screen, the G key will appear. Heading up the ladder at the top of the screen will lead to another part of the igloo, where there are six plastic fish and a joke for the joke book. Finally, the next area of Snowglobe Mountain can be entered through the exit at the south of the igloo.

In the middle of this area is the igloo, along with another Mr. Penguin. Heading to any edge of the map will transport the party to the main area of Snowglobe Mountain, but there are a few things to be found here. The Y key can be collected near some trees in the northeast, and there is a break time event in the southwest where the party can sit by a fire together. There is also a watermelon containing a Sno-Cone Ticket that can be found after heading north from the tree farthest west from the igloo, as well as a WTF Value event directly east of it.

The main area of Snowglobe Mountain is the mountain itself, a large, vertically oriented map containing several exclusive enemies. This map is split up into two sections, with the first section being slightly larger and containing fewer events. Some notable things there include: a cave with a watermelon containing the Tenderizer, another watermelon containing the Snowball, several Clam and EXP Snowflakes, Mr. Penguins, Trevor, and a Sno-cone Machine.


The second section of Snowglobe Mountain, most notably, has a picnic with Mari and Basil, a Pluto's Spaceline, a mirror, and a telescope. Other things in this section include: Snowglobes, Babo, a tentacle, Mr. Penguins, and more Clam and EXP Snowflakes.

In this part of Snowglobe Mountain, the mood abruptly changes and the snowstorm becomes heavier. Large icicles replace the earlier snow-covered trees, and the only regular enemy to be found here is the Snow Angel; a group of them will immediately chase and attempt to surround the party. After progressing past them or escaping them, there are also three watermelons in the nearby area.


Heading through a system of caves at the top of the first map leads to a second map, in which Space Ex-Husband can be found at the very top of the mountain. On the way up to battle him, there is also another picnic and several Mr. Penguins warning the party away from Space Ex-Husband. After defeating him, he will exit in his spaceship and can no longer be found in Snowglobe Mountain. This also progresses the Son of a Space Pirate quest.