This desolate, yet eventful area resembles a large neighborhood, strongly implied to be based on the streets of Faraway.

There are many houses, neatly aligned in rows. Omori is free to ring the doorbells as much as he pleases, although nothing usually happens. The door in the fifth row from up and four doors to the left of the middle street triggers a brief jumpscare of a mannequin strongly resembling Mari.

There's a bathtub and a fridge in the middle of the street, and multiple crudely drawn deer that run in place. They cannot be interacted with.

At the very bottom of the area lies Stranger and a key. Stranger will note that he was split on the day Sunny hid the truth, and asks Omori which was more painful: Sunny 'becoming nothing,' or Stranger being forcibly split.

Like in most other rooms, collecting the key will spawn red hands that will teleport you back to Black Space's hub.

Interacting with the door with the clock on it's head, on the fourth house in the fifth row from the top will bring you to Mari's House.
Her house is notably larger on the inside, and contains minor decorations such as bookshelves, a potted plant, and more disturbingly, figures that strongly resemble someone hanging. The most notable features are a cake on the floor, and a strange painting.
The painting and the cake are the only things that can be interacted with.

If Omori chooses to eat the cake, he will note that it is oddly crunchy while chewing it, before realizing that his molars are missing.


If Omori examines the painting, he will look at it more closely; it features a woman with very long hair that vaguely resembles Mari.
After looking away, the girl will exit the painting and follow Omori around. While she cannot hurt him in any way, she can potentially block his path.

While dummied out in the final game, interacting with the mirror would've originally taken Omori to the Room with Self event. 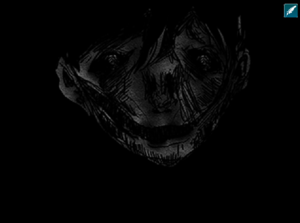 Room with self, completed with use of noclip.

This strange, unused room depicts a very large, distorted version of Omori's face. The room would've functioned as a puzzle; the player would control a set of eyes instead of Omori. The objective of the puzzle would be to get the eyes into the distorted Omori's eye sockets. However, without further modification, this puzzle is impossible to complete normally, as collision on Omori's nose prevents the player from slotting the eyes. In the event that a noclip cheat is used to complete the puzzle, Omori will simply be returned to Mari's House. [1]

Omori's distorted face is identical to the one used in the random Headspace mirror jumpscare, but significantly larger and more detailed.

If the player interacts with one specific tombstone at the top of the area, they will be teleported to the Developer Room.
This room contains many tombstones with witty text written on them by the developers of OMORI.

Stranger: "When you hid the truth, you sealed a part of me away with it."
Stranger: "He's been waiting for someone to save him all this time."
Stranger: "On that day... When you became nothing... I was split in half. Which one do you think was more painful?"


Tombstone room, from the top left to right:


There is another tombstone, far off from the rest. It says:
"Here lies other guy."