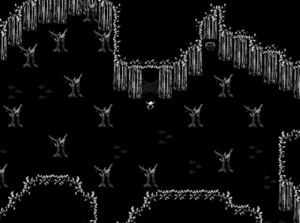 The Looping Forest is an area found in Black Space. It can be accessed through one of the doors in the Black Space 2 hub area.

The Looping Forest is a maze like forest than loops around. Several entities like a crudely drawn Mari and an UFO can be found floating around here.
There is a radio that will play seemingly random songs with static in between them. There are several boxes that describe Sunny's guilt over what he has done.


"Swumphart", a thing that resembles Sweetheart with exaggerated features and weird speech can be also found. Kel travels at fast speeds around the map, if he gets near Omori, he will greet him before quickly running off.


A door can be found near the mirror. Entering it will cause Omori to quickly exit it again, telling the player that Omori "saw something, but decided it wasn't for you.".


Somewhere, a giant steak can be found. Interacting with it will cause Omori to eat it and every attempt to run will be greeted with a textbox telling the player that Omori is "too full to run". This effects gets lifted rather quickly.

Roughly to the bottom right of the ladder leading to "Heads looking up", a mirror can be found. Interacting with the mirror will ask the player if they want to play hide-and-seek. If yes is chosen, the mirror will count down from five and will then let you seek it out.
If the request is denied, then the mirror will fade out and Omori must stab to try again.


There are two possible locations for the mirror:

After being found either once or twice, depending on where the mirror was, "Shattered Omori", Omori's reflection, will walk out of the mirror and count down from five. He will be near the very first location, which is at below the smiley waterfall.
Upon finding Shattered Omori, he will shatter and only a pile of shards remain. After leaving this area, the pile of shards will move to the mirror's original location. Moving over the pile will damage Omori slightly based on his maximum HP.

A ladder can be found that leads into some clouds. At the bottom of this ladder is a blob, possibly resembling Hector. Going up the ladders leads you to "Heads looking up".


Heads looking up is a narrow horizontal area with heads looking up that resemble Mari's. In the middle is a telephone that can be interacted with. If done so, a big bubble with get out of the phone and follow Omori. There are 7 bubbles in total and they read:


This room resembles a school hallway. A stuffed toy blocks the way back. The hallway is full with Aubreys that want to go on a date with Omori. If Omori passes them, they will talk to him and start to follow him. Once Omori reached the end of the hallway, the (presumably real) Aubrey will exclaim, that she wants to be the one that goes on a date with Omori.
Distraught, she attacks one of the Aubreys following Omori, causing a fight. Once there's only two Aubrey's they will ask Omori to pick one of them. Shortly after, Omori wakes up.

Yet another door can be found through a somewhat hidden pathway, if entered, will bring Omori in the shrinking room.


The shrinking room is a narrow room 3 tile wide room that shrinks to a 1 tile wide room. At the other end is a door that leads to the very small room.

The very small door features a small platform for Omori to stand on and a big figure with a large, pointy snout looking down at him.