The battle system in OMORI is similar to combat in the traditional turn-based JRPGs the game takes inspiration from, with additional mechanics that change the flow of combat, such as emotions and follow-ups.

Most stats in the game mirror typical RPG stats, save for some small differences, as seen below: 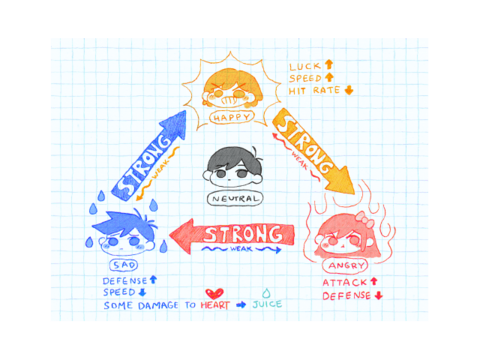 Simply put, the buffs and debuffs affecting a stat all interact multiplicatively.

The calculated stat is then rounded to the nearest whole number and will not exceed 999.

The bonus from release energy and sno-cone are only applicable to players.

In calculating damage, keep in mind that the game uses the calculated stats that has been rounded to the nearest whole number.

A majority of attacks have a randomness factor of 20%, this means it will have its final damage deal anywhere between 80% and 120% of its original calculated value.